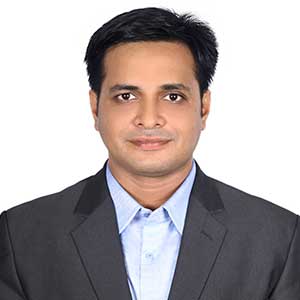 He is an Electrical Engineer. He completed his B. Sc in E.E.E from Ahsanullah University of Science & Technology BBA and Executive MBA from Institute of Business Administration (IBA) of University of Dhaka.

He started his career in a renowned Company of Bangladesh “ Adex Corporation Ltd”. He served as Manager for Construction Department where he looked after the MEP team. During his tenure he helped the Construction team to achieve yearly turnover of 120 Crore from 25 crore when he started in 2008. He joined Rahimafrooz Energy Services Ltd (RESL) in 2015. He worked with then CEO to establish the MEP department for RESL .He joined Edison Group in 2017 as AGM for Edison Power BBT Department. During his tenure he helped Edison Power to achieve astounding success in achieving turn key projects for the team and establish the power team as a key player in the market. He also served as Head of Corporate Sales & Project in Energypac Electronics Ltd where he led 5 departments including Professional Lighting, Green Technology, PWD, MES & Industry.

During his journey he has achieved some significant milestones. He is awarded best performer award 5 times consecutively while he was in Adex. Also he got the award for best team while in Rahimafrooz. Also he led 3 teams to achieve best team award while in Energypac Group. He has worked with lot of remarkable projects in the country for MEP solutions like Dhaka Stock Exchange Headquarter, Gramenphone Head Quarter, Monem Business District, Le Meridien Khilkhet, Hotel Radisson Blu, Chittagong, Independent Television Building etc.

© 2021 Edison Power | Developed by The CellTech